In April 1967, David Niven took the opportunity to fly his family out to Hollywood, where he was due to work on a movie called ‘The Extraordinary Seaman’. According to Niven biographer Charles Francisco: “They could have an entire week together before he had to begin work, and get someone to find them a nice house to rent for the three months of filming.”

Niven in the jungle 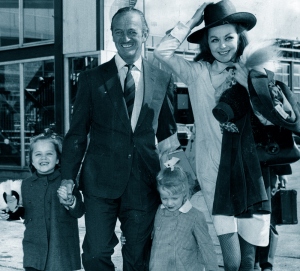 Unfortunately the plan was partly rained off during the first week, and then entirely washed away when MGM decided to move production south of the border.

David reportedly went ahead to scout the Minitatlan area, in the hope of finding suitable accommodation for his family despite warnings about the food and water, but it seems his mission was unsuccessful. Oh well, it was a nice idea while it lasted…

“When the location was switched to a remote part of Mexico,” journalist Earl Wilson reported,”David sent the girls and their English nanny back to Switzerland.”

However, Hjördis was still in the US long enough to have her marriage scrutinized by the local press, lead by gossip columnist Sheilah Graham:

“Happiness for David Niven and his wife Hjördis is two fragments of femininity – five-year old Kristina and three-year old Fiona. They were adopted as tiny tots when the marriage of the Nivens had become somewhat shaky but you would never know that today with the contented couple.”

“His second marriage has not always been tranquil,” Earl Wilson followed up. “His wife has called it quits several times, most publicly in 1959.”

Hjördis also managed to run into a United Press journalist on her flight back to Europe, who scribbled down what seems to have been a fairly relaxed chat.

“I met Mrs. Niven on a European bound plane, then talked further with her at the family’s stunning white villa, on a point jutting out into the blue Mediterranean. The Nivens were ending a two-week visit with the actor, who was going on movie location in jungles near Veracruz, Mexico.”

“The two children have traversed the Western European continent and England, and gone to California several times… racking up car and air mileage few adults can count.”

“‘I’ve travelled with them since they were babies’, said Mrs. Niven, a tall and slim, striking blonde of Swedish birth, married to Niven for ‘about 500 years’.”

“‘I have no particular advice to offer other parents who travel with children except to keep them busy – if you can. Children get bored easily. I let mine talk … it helps them but certainly drains a lot of energy out of the mother. But how will they learn except to ask questions?'”

“I noted that Mrs. Niven had boarded with a tote bag into which she’d stuffed puppet dolls, coloring books and games to ward off boredom. She doesn’t believe in a lot of snacks as a relief from a tiring trip. ‘Mine don’t get a lot of candy and pop,’ she said. ‘I think they tend to make children uncomfortable.'”

Back to the Delmonico

After completing ‘The Extraordinary Seaman’ (which was a far from extraordinary movie), David bypassed Hollywood and flew back to Europe. Unfortunately his stay at home proved little more than a visit, as another movie awaited him in London.

“I do work a lot,” he said. “After this one I go straight into ‘Prudence and the Pill’.” The movie was as bad as its title suggested. Time magazine wasted very little ink on it, summing it up as a ‘cretinous comedy.’

While filming at Pinewood, David commuted at weekends. Although he and Hjördis could rub each other up the wrong way, it seems that they were better together than apart. London was also something of a playground for David. He eventually rented a flat there as a bolt-hole to entertain his girlfriends.

The planned family visit to Hollywood was able to go ahead in October, with David signed up for his third movie of 1967: ‘The Impossible Years’.

In late November, Hjördis made a return to the Delmonico Hotel in New York, where she had stayed on her first trip to America, back in December 1945. On that occasion she was with her fiance Carl Tersmeden. This time she was attending a dinner-dance thrown to celebrate the engagement of David’s son Jamie to Fernanda Wetherill.

Despite a ridiculously busy schedule for the year (which he would never equal again) David was still up for recording a BBC special called ‘David Niven’s Scotland’ on his return to Europe.

The one man self-help group

In ‘The Impossible Years’, David played a psychiatrist. “I don’t go to head-shrinkers,” he commented, “I shrink my own!”

Hjördis first described his self-help credentials back in 1957: “I was startled to find him in a ridiculous position and staring at the tip of his nose. ‘Quiet please’, he said, ‘I’m concentrating.'”

“This was disconcerting enough, but not nearly so much as when I found him a few days later standing on his head with his feet against the wall. ‘Don’t disturb me,’ he said politely. ‘I’m concentrating.'”

“It seems that when we were visiting the Cary Grants in Palm Springs, David had picked up a book on yoga. He was wounded during the war. and as a result his back bothered him. When Cary Grant told him he was practising yoga, David was intrigued. Cary has the business of relaxing down to a fine point. The more David read about yoga the more it fascinated him and he began experimenting with the various exercises. Sure enough, he hasn’t had any back problems since.”

“Like all Pisceans he was a worrier,” Hjördis told Sheridan Morley, “but he also had that marvelous gift of being able to look at life objectively.” Which was probably just as well. He was also helped in 1967 by the $1 million dollar pay packet for his nine months work.

“David’s home was really wherever the family was,” Hjördis later remembered. “But he did seem terribly happy once we’d got the two girls and the homes in Switzerland and France, and he could ski, sail and fish whenever he wasn’t working.”

Extended family time finally came over Christmas. David was proud to claim that he now refused to sign for films due to be shot over the winter season.

“We start preparing early,” he told ‘Celebrity Cookbook’ writer Johna Blinn in between takes of ‘The Impossible Years’. “My wife makes a simple little thing called Jansson’s Temptation that’s terribly good. It’s nothing more than a potato and onion thing done in cream.”

The wonderfully entertaining Silver Screen Suppers have tested Hjordis’ recipe and given it a positive write-up. The site is well worth a visit.

David’s recipe for the accompanying Swedish “aromatic brew” of glogg, would be better off tested by NASA. The ingredients list half a bottle of vodka, a bottle of port, a bottle of claret (or sherry), and other sundry bits – including two cinnamon sticks, half a cup of sugar lumps – and additional cognac to taste. All served in a copper kettle. Skål…

Glogg or no glogg, Hjördis managed to avoid a skiing accident during their winter in Switzerland, but instead suffered a bizarre miss-hap when she broke a finger after getting into an over-enthusiastic pillow fight with Kristina and Fiona. Clumsy clumsy.

Next page: All so distinctive and ‘notice me’, 1968 or take a short detour, either to The Nivens at Lo Scoglietto, 1967 or David and Hjördis Niven’s Christmas recipes, 1967

Lo Scoglietto under renovation in 1999