“It took a long time and a lot of money and work, but, in return, David Niven and his wife and two small daughters have exactly what they want in their beautiful villa at the tip of Cap Ferrat.” Woman’s Home Journal

As Hjördis‘ story progressed towards the 1970s, her life seemed to become more and more of a series of highs and lows.

Anyway – it feels like time for some sun to shine through – hence this very beautiful set of photographs, taken for a Swedish magazine in the spring of 1967. Hjördis looks relaxed and happy, and Lo Scoglietto looks like a dream.

Some of David’s friends who were critical of Hjördis also denigrated Lo Scoglietto – almost as if it were an extension of both her and the marriage. Well, these photos paint a different picture, and bring to mind Hjördis‘ words from 1964: “It is a home that likes to be lived in, a happy, sunny place.”

And maybe it was, though as ever, things were not quite that simple.

In the spring of 1967, Swedish magazine Husmodern sent journalist Margerita Hernberg with a photographer to visit the Nivens in the south of France. Ms Hernberg’s first impression of the Nivens could not have been more positive:

“The Nivens surpass what you see in the cinema. She is prettier than most film stars; long-legged, slender, with huge gray eyes framed by cool wing-shaped eyebrows and a fine mesh of laughter lines. He is just as charming as on film, combining dry humour, irony and a kindly disposition.”

Winding up the visitors

David quickly put his visitors at ease with a well-honed selection of stories from his “chequered life”, although Margerita became aware that Hjördis had heard them many times before. Job done, David donned snorkel and flippers before disappearing into the Mediterranean to catch sea urchins for the next day’s breakfast.

At this point, Hjördis decided to put Ms Hernberg back on edge. Gazing into the distance, she announced: “Dave hates journalists…”

“…He has three different ways to treat them. Either he lets the servants throw them out immediately, or he asks in his inimitably polite English way if the journalist would like to take a cool dip in the pool. And while he or she is happily splashing about in the shimmering blue water, believing that an interview is practically guaranteed, he will disappear until they have gone.”

Still staring impassively ahead, Hjördis stretched out her arms and explained that the third way for David to treat journalists was to “tell them the most amazing stories of his life”. Then, next day he would buy the newspaper in question, and laugh as he read his words.

At that point, David was still in the water of Lo Scoglietto’s small harbour, and called out: “Come and take a swim!”

Margerita recalled option two, but was calmed, slightly, by the knowledge that David had invited her into the sea, not the pool, and was still there himself.

The next day, the visiting Swedes returned to photograph Hjördis in the house. They were also introduced to, and charmed by, the Nivens’ daughters.

“We met Kristina, five years, and Fiona, three – two delightfully lively little girls”, who kissed their mum and dad before curtsying to their visitors.

“‘What’s your name?’ Kristina asked in Swedish, cuddling up next to me. Fiona, who also speaks Swedish, said: ‘Look, I have a fancy dress on today!'” [And migraine-inducing, going by the photos]

“David Niven turns with a studied expression of infinite suffering on his face. “I’m a stranger. A stranger in my own home. I never have a clue what my three women are concocting behind my back. They talk all time in that strange Eskimo language that I don’t understand. I can only say ‘sweetheart’, ‘salmon’ and ‘herring’ in Swedish!'”

A tour of Lo Scoglietto

While Hjördis disappeared to be photographed in the house, David gave Margerita a tour of the Lo Scoglietto house and garden. Most of his descriptions are very similar to Hjördis‘ words on the same subject back in 1964, but, I’m going to repeat them anyway:

“When we decided to move in, almost six years ago, the villa had been for sale for fourteen years. Nobody wanted Lo Scoglietto – the little rock – and our friends warned us against it. It did look frightful inside. The parquet floor was in miserable shape – we hardly dared to walk on it – and, in the middle of the living room was a column supporting the ceiling, which absolutely ruined the room. The first floor was one long hotel corridor with bedrooms on either side. Now the villa is light and airy, and we love it.”

“We have the oldest olive trees on the coast,” David said, “two of them are more than two thousand years old – and the fig trees at our boat harbour at the front of the house receive water from wells from which Greek sailors are said to have drawn water in olden times.”

“The garden had been completely neglected, and one of the first jobs was to have the trees pruned so that the sun could penetrate the almost swampy ground. Today there is a lawn, trees, and red oleanders reflected in the swimming pool – and, of course, a view of the Mediterranean. And beside the pool, a small terrace with columns like a miniature Greek temple, which is complete with changing rooms, shower, and a small bar.”

Margerita had in fact been shown the changing rooms by Hjördis, before her dip in the Med: “On the shelves in Hjördis’ area are stacks of swimsuits in every colour of the rainbow, with bathing caps too. The swimsuits are washed by a maid after every swim, and then added back, dry and clean, to the shelves.” 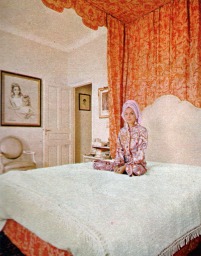 “Hjördis looking like an Oriental princess in her Pucci pyjamas, her head towel-turbaned after a swim.” On the wall is a portrait of Hjordis and Kristina by Spanish artist Alejo Vidal-Quadras.

David and Hjördis Niven at Lo Scoglietto, spring 1967. “Some of the beautiful old trees in the garden, which has the Mediterranean as a backcloth.”

“Hjördis Niven on the edge of the brown marble bathtub. There there are large built-in cabinets with space for underwear, trousers and jumpers so that she can get fully dressed after a bath without having to leave the bathroom.”

Her photo session completed, Hjördis came running towards them.. “With her slender schoolgirl leap and the long hair over her shoulders she looks like a teenager,” Margerita noted.

“‘What are you talking about?’ she asked, and added with a wink: ‘You haven’t been mean have you, Dave?'”

“That’s the last thing David Niven could be accused of,” the bemused journalist wrote, “and one begins to wonder if his alleged disgust of journalists is just Hjördis’ little joke.” [Or well-founded paranoia]

“I was just telling her how happy we are here at Lo Scoglietto,” David replied, “as we are also happy in our Swiss chalet. I love that country too. But it doesn’t really matter where we are as long as we can all be together. When my new movie ‘The Extraordinary Seaman’ is recorded in Hollywood next month, I’ll have you and the kids travel with me. I don’t travel solo.”

“He puts his arm around Hjördis, and we head up to the house. Hjördis turns to me and smiles. ‘Dave and I have so much fun together,’ she says.”

Next page: The Impossible Years, 1967-1968 or pop over to the Nivens’ Swiss chalet for a quick look around: The Nivens in Château-d’Oex 1965