During her time in London, Hjördis stayed less than a mile from the registry office, with a Mrs Kathleen Rivers-Kirby, who told the curious UK press that Hjördis “is very beautiful, with a lovely figure, an excellent sense of humour, and is a very sweet person.” These are all recurring descriptions of Hjördis. References to her beauty appeared beside virtually every written mention of her name throughout the rest of the 1940s, and all of the 1950s, 60s and 70s. 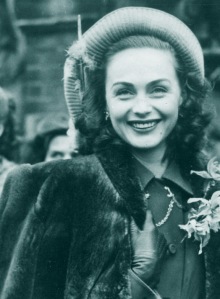 The short notice left the press little time to find out about the bride. The Swedish Embassy in London was approached – and mentioned that her former husband was a wealthy business man, while London Film Productions, the makers of ‘Bonnie Prince Charlie’, really pushed the information boat out by describing her as “very lovely”.

The Daily Mail went to the trouble of asking in Sweden, and came back with photos from Hjördis’ modelling years, with an explanation that they were taken before the New Look arrived in Scandinavia, and news that “for several years, Hjördis has been known as the no.1 mannequin at the fashionable NK stores.”

With an upcoming journey to Hollywood, there was also a scramble for information in the USA. On the west coat, Warners actress Viveca Lindfors, who had known Hjördis in Sweden, provided gossip columnist Louella Parsons with a gushing description:

“She’s one of the most beautiful girls I’ve ever seen. Her figure is the most perfect of any girl in Sweden, or maybe in the whole world, and she is a very fine and very lovely person.”

On the east coast, fractured snippets were stapled together, mentioning that Hjördis was “not unknown” in New York, having recently been based at the Stanhope Hotel while looking for work in the fashion industry. Igor Cassini could have shed more light than most, but with his next marriage only a few days away, and having written a contradictory report two weeks earlier, he kept out of it.

The marriage was greeted with some cynicism in Sweden, where the motives of Igor Cassini’s last two fashion model conquests – Inga Lindgren and Hjördis – were questioned: “Who is the most beautiful, and who can marry more millionaires before silver hair forces a quiet home life?”

“I think the attraction was almost entirely sexual”, David Jr commented in 1998.

David’s Hollywood friends were caught out by his sudden marriage. He wrote to Rita Hayworth two weeks before, saying: “I’m coming back to Hollywood soon… still a bachelor” – which was true at the time but revealed nothing of his intentions. Based on the detail provided, Rita expected to be David’s first date on his return.

When news of his marriage broke, she quickly demonstrated that she could give up her acting career for married life, by moving to France in May 1948 to marry Aly Khan. [Hold on, haven’t we heard that name before? Ah yes, one of Carl Gustaf Tersmeden’s playboy friends]. Rita soon became aware of his playboy tendencies and divorced him in Reno, 1951, citing “extreme cruelty, entirely mental in nature.” Sounds familiar.

“Rita Hayworth wanted to be the next Mrs. David Niven,” David’s friend Peter Ustinov said. “Rita was a great deal of fun and extremely beautiful – all that glorious red hair. David loved her, but not enough to want her for his wife. I don’t know if he loved Hjördis, but when she became Mrs. David Niven it made him safe from all the others who wanted to be his wife.”

David called Sam Goldwyn to say “She’s beautiful, and I’m the luckiest man in the world.”

“I think the attraction was almost entirely sexual”, David Jr commented in 1998.

As well as needing to evade the taxman, David was also on orders from Sam Goldwyn to be back in Hollywood by 2nd February.

And so, with barely any time to take in their new circumstances, on Saturday 17th January 1948 the happy couple were driven from London to catch the RMS Queen Elizabeth in Southampton, bound for New York. Hjördis claimed that it was only then that she woke up to the full reality of her new role:

“When we had driven for a while, David suddenly said, ‘Now let’s go and get the boys’. At first I did not understand what he meant, but then it came to me that he meant his sons David and Jamie. In the general hurry of the wedding he had forgotten to tell me that they would be on the same boat as us and that we had to pick them up.”

“(On the ship), the door of an adjoining cabin burst open. There were David Jr and Jamie jumping around excitedly to greet their Daddy. It had never dawned on me that they would be coming with us; it may sound silly [yes, it does a bit], but until this moment it just hadn’t occurred to me that I was becoming mother to those two motherless young boys. I was so besotted with David that I just wanted to be with him.”

During a particluarly off-hand interview in 1960, Hjördis told a more fantasical version of the story: “The day after my husband and I were married we boarded the Queen Mary, and he introduced me to two little boys. ‘These are my children.’ He hadn’t mentioned them before.” It wasn’t what actually happened, probably more a memory of how it felt at the time. David, being a lover of tall tales, happily added this re-write to his repertoire.

To be fair, it seems that David chose to gamble that all would be well rather than pointing out the situation earlier and risk spoiling the dream. For Hjördis, the penny finally dropped regarding her new married life.

“Right away I started making problems. Would the children resent me? Would I be a storybook stepmother? What would they call me? I was frightened of them. David was trying hard to be the perfect father, but he was apprehensive, too.”

“The first morning on the boat, little David and Jamie came to my bedside. They stared curiously, but favourably on me and were apparently still not really clear on where I belonged in their lives. Jamie picked a flower from my breakfast tray, handed it to me and said: ‘I want to give this to Mummy.’ I dissolved in a rosy glow of love. Jamie in his own little way had broken the ice.” Almost.

Hjördis and David Niven on board the RMS Queen Elizabeth, January 1948

Rex Harrison and his actress wife Lilli Palmer were on the same Atlantic crossing. On arrival in America, Lilli was grilled by Louella Parsons. “Lilli tells me that Mrs Niven is a darling,” Louella  repeated, “and that David’s two boys called her Mummy at their first meeting.”

In her Swedish memoirs Hjördis wrote: “I must now take care to mention that I am unusually lucky in terms of my stepchildren. There are two very delightful boys and we have been well-matched to each other from the very beginning. At first they did not know what to call me, but then Jamie, the youngest, began to say ‘Mummy’ to me and then Little David did the same thing.” That was not to last. “Now they call me, like everyone else does, ‘Nej'”.

“The name ‘Nej’ came about when I was newly married to David and my English was pretty weak.  I used to always say ‘Nej’ [Swedish for ‘no’] instead of ‘No’. Of course, I now say ‘No’ in English, but the name stuck, and I’ve had to accept that it always will.”

Hjördis answered her stepmother doubts by coming up with a simple solution to her new status, which she stuck to rigidly. She decided that she was amenable to be a big sister or a best friend to the boys, but was not going to be their new mother. It was not a decision that she ever felt inclined to change.

“When she arrived she could hardly speak any English, but she was very young – only 28 – and terrific fun to begin with,” David Jnr told the Daily Mail in 2009. “She used to say she never wanted to be a replacement for our mother.”

“I have never thought of myself as a stepmother – or even as a mother,” Hjördis said in 1954. “And I think that’s a good thing. The boys are David’s and we agreed that he should take all decisions concerning them.”

Next page: Niven in Hollywood