In 1965 David Niven began in earnest to introduce his new family to the world: “It is the best thing I’ve ever done. It’s too awful for an actor to grow old worrying about himself and his wrinkles. You’ve got to have someone else to worry over. And now I’ve got the girls.”

“Look at Hjördis teaching them to ski,” he told the visiting Sheilah Graham. “Two years ago, as you know, my wife broke her leg in 15 places skiing, and it’s only just better. She’s a mad Swede who loves to ski.”

David appeared to revel in the eccentricity surrounding him. At least it helped to add to his fund of stories.

“Screwballs? I love ’em! Take it from me. They’re the only people keeping us sane. They turn grey into blue.”

During a dinner party in Monte Carlo in 1961, party organiser Elsa Maxwell recorded that among the guests was: “Mrs David Niven, a beautiful Swede, whom a friend described as ‘delightfully mad’.”

Although David also rated Hjördis as “a great eccentric” she wasn’t the only one in the Niven household.

The Nivens’ only two full-time staff by now were Evelyn Walne, the children’s nurse, and Bernardo the butler – who creates a mental picture similar to Lurch from the Addams Family.

(Update: Well, the photo above has turned up, which sadly miniaturises my Addams Family theory. But, at least it shows Bernardo in his famous white coat. Confession – on first view of this photo I just thought he was the local gas fitter.)

“We are currently being looked after by Bernardo,” Hjördis wrote in 1960, “who is a perfect treasure. He fits us like a hand in a glove, because he enjoys nothing more than cooking. He walks out in the morning with his little basket and buys a lot of food and then he goes to the kitchen and cooks all day. His kitchen is a mixture of Italian and French and we have never eaten as well as we do now! You should taste his ravioli! Not to mention his different ways of preparing everyday vegetables to taste like exotic delights!”

“He is marvelous,” David told journalist Peter Evans. “He does everything. The only problem is, he insists on wearing an appalling white coat all of the time. He bought it from the milkman and he goes fishing in it, cleans the windows in it, and polishes the cars in it. Grace came the other evening and thought he was the doctor. She couldn’t understand why he was serving dinner.”

As the century progressed, Downton Abbey-quality servants became harder to find, and the Nivens ended up hiring a succession of dodgy characters. David’s journalist friend Roddy Mann described how Bernardo was eventually head-hunted, and chose Hjördis as his means of escape.

“When his butler, having been offered a huge increase by one of David’s less scrupulous friends decided the only way to get out of his contract was to get fired, he actually bored a hole in Hjördis Niven’s breakfast cup, so that she was drenched with hot tea the following morning.” Almost believable.

Apart from packing and repacking I love it

In order to maintain his lifestyle, David set aside quality control, accepted the films he was offered, and spent a lot of time away from home replenishing the Niven coffers. “I have to go on working,” he told Roddy Mann. “You see, I love living in the lap.” Loving to live in the lap was something which David and Hjördis had in common, albeit one which he chased and she simply expected.

In the opening months of the year, David was still finishing off two movies carried over from 1964. “I’m being batted between two movies like a ping-pong ball”, he told Hedda Hopper in January 1965. “Apart from packing and repacking I love it. Actors are such hams.”

The James Bond knock-off ‘Where the Spies Are’ followed the adventures of Dr. Jason Love [groan..]. David’s hope was that it would spark off a franchise, providing regular work and income. However, the spy movie genre had become over-saturated, and the projected series finished after only one outing.

‘Lady L’ was directed by David’s old friend Peter Ustinov, and also starred Paul Newman and Sophia Loren. All three were among the Nivens’ guests at Chateau D’Oex during the 1964-1965 festive season.

“Our village in Switzerland has been housing a string of stars,” David name-dropped to Hedda Hopper. “Natalie Wood is staying with us for two weeks of skiing [At the time she was David Jr’s girlfriend]. Sophia Loren, Noel Coward, Peter Ustinov and the Paul Newmans all came for lunch or dinner.”

“Our neighbours protected us from the Paparazzi. When a local gendarme saw one of them sneaking telephoto shots through our hedge, he escorted him to the main road and told him to keep moving.”

I’d guess Paul Newman and Sophia Loren visited at different times. According to Peter Ustinov the hostility between them on set was something to behold. Loren tried to make peace at one point and asked Newman how he stuck his false moustache on. “With sperm!” Newman snapped.

Sophia Loren was the subject of a story cut from David’s ‘The Moon’s A Balloon’ autobiography, which described ego issues while promoting ‘Lady L’.

“The producers called a press conference, and the three stars were told to appear at 2 o’clock. Niven and Newman dutifully showed up at 2. No Sophia. They answered scattered questions for half an hour. Still no Sophia. Finally the door opened and in she swept. She slinked into a prominent position in front of the canape table, struck a pose, and immediately one spotlight hit her face from the right and another preset pinpoint spot hit her from the left.”

“‘Come Daveed. Come Paul darleeng,’ she called imperiously, holding out her arms. They had no choice but to come and stand in semi-darkness on either side of the well-lit Sophia. ‘But she was really a charming woman,’ adds David unnecessarily.”

Hjördis was more forthcoming about Ms Loren’s company. “I’m good friends with Sophia Loren,” she wrote in 1960. “She is cheery, and fun. I’ll never forget a silly canasta game at David Selznick’s, when Patricia Medina and I played against Sophia and Henry Fonda’s (Italian) wife, Afdera. Sophia and Afdera wanted to play the Italian way, using jokers, while the rest of us wanted to play normally. Of course there was no question of a result, but we were laughing ourselves to death.”

In October 1965, Hjördis brought Kristina and Fiona to London, where the British press met the girls for the first time on home soil. David was based at nearby Boreham Wood, making his third movie of the year, a chiller called ‘The Eye Of The Devil’.

Hjördis passed time with shopping sprees in London, and with Christmas approaching, she and David were invited to dinner by the actor Dirk Bogarde. They were joined by comedian Peter Cook and his wife Wendy – who was quickly tiring of the superficial showbiz lifestyle into which she’d been dropped.

In ‘One Leg Too Few: The Adventures of Peter Cook and Dudley Moore’ author William Cook described the evening:

“There was awkward moment over dinner when Wendy (rather admirably) tore into Mrs Niven for boasting that she’d had to hire an extra suite at Claridge’s, simply to accommodate the couple’s copious Christmas presents.”

In 2002, Wendy Cook stated her belief that Peter’s later descent into alcoholic dependency, depression and promiscuity were the result of his emotional vulnerability. In Hjördis, she may have recognised someone already on that path.

“Hang on a minute, lads. I’ve got a great idea” (Michael Caine, The Italian Job)

Despite the shooting of “The Eye Of The Devil” running eerily late – actress Kim Novak had to be replaced in November by David’s old friend Deborah Kerr – the Nivens were still able to spend some time in Switzerland. This included a moment of horror while driving to Chateau D’Oex.

A news report on 12th December 1965 stated that David and Hjördis “narrowly missed death” when their sports car skidded on the ice on a Swiss mountain pass and balanced against a boulder over a 350ft drop (or 150 ft according to another source, which may also be an exagerration). “Both he and Hjördis were scratched and bruised, but not seriously hurt. However, both needed a day in hospital under sedation.”

A shocked David was quoted as saying: “It was the nearest I have ever been to death. Another few inches and we would have plummeted to the bottom. Poor Hjördis was terrified. She was on the side hanging over the drop.”

Aside from occasional crazy incidents, news of Hjördis‘ doings, comings and goings lessened as the sixties progressed, along with the frequency of her interviews. There’s only so much you can write about her playing cards in the afternoon at the Palace Hotel in Gstaad, or sitting in the Cap Ferrat sun with a telephone in one hand and an alcoholic beverage in the other. Even a Hjördis-focused website could end up with her disappearing further and further into the background of David’s adventures. It seems that’s how it also was in real life.

Next page: Mr Niven’s brand of peerless charm, 1965, or take a little time to have a look around the Nivens’ chalet: The Nivens in Château-d’Oex 1965

Lo Scoglietto under renovation in 1999 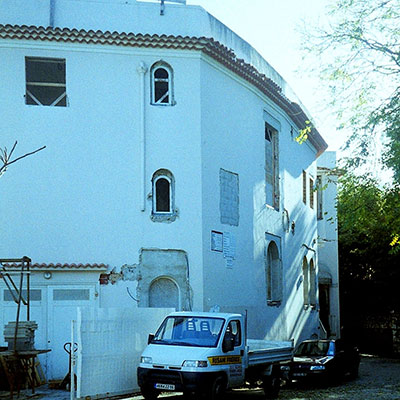